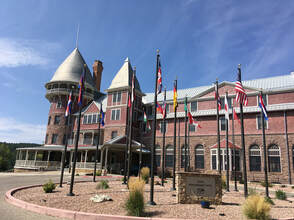 MONTEZUMA CASTLE, Montezuma, New Mexico
Located approximately six miles from the town of Las Vegas New Mexico, the Montezuma Castle since 1982 has been home to the United World College, a two-year international high school with c. 230 students from 70-80 different countries.  Students graduate with the full International Baccalaureate Diploma.
Montezuma Castle was originally built as a luxury resort hotel at the site of the Las Vegas Hot Springs by the Atchison, Topeka and Santa Fe Railroad.  The current building is actually the third to be built, the first two (built in 1881 and 1885) having burned down. They were the first buildings in New Mexico to have electric lighting.  It operated as a hotel until 1903, then changed ownership and purposes several times, finally remaining vacant for several years.  The Castle and 100 acres of surrounding property were purchased in 1981 by industrialist and philanthropist Armand Hammer who made significant repairs to the building and established the United World College on the site.
Montezuma Castle and the entirety of the United World College campus is a lovely facility consisting of several buildings on two levels connected by ranks of steps.  On approach to the campus, the Castle is visible above the trees in the distance and presents an impressive sight. Well worth a visit is the Dwan Light Sanctuary, located at the upper end of the campus.  It has been described as a “futuristic temple of light” which uses prisms and natural light sources to create a peaceful meditative space. The nearby hot springs can still be enjoyed.
The Castle is located in the foothills of the Sangre de Cristo Mountains northwest of the City of Las Vegas, New Mexico, about 70 miles northeast of Santa Fe and 123 miles from Albuquerque where the closest major airport is located.   There is also an airport in Santa Fe, with limited commercial flights. Las Vegas can be reached via major and well-maintained highways (primarily I-25), but no public transportation is available.
As the location is in a mountainous area, the temperature can vary widely (30-40 degrees) from daytime to nighttime.  Average temperature in June ranges from the low 80s to the low 40s. It is recommended that you bring a light jacket or sweater for comfort in the evenings.  The altitude is 7500 ft.
For a campus map and more information about United World College, see their website: https://www.uwc-usa.org/about-us/our-campus/
For directions to campus, see here: https://www.uwc-usa.org/our-community/come-visit/directions/

LAS VEGAS, New Mexico
Las Vegas, New Mexico, population c. 13,000, is an Old West town, established in 1835 on a Mexican land grant.  It was laid out in a traditional Spanish Colonial style around a central plaza. It was a stop on the Santa Fe Trail and in 1880 also became a stop on the railroad which led to a railroad boom for the town.  During the railroad era, it became a prominent city in the American Southwest and featured all the modern amenities of the day, including an opera house, a Carnegie library, the Hotel Castaneda (a Harvey House hotel) and a school that is now New Mexico Highlands University.  The Plaza Hotel, built in 1881, remains a lovely historic destination on the plaza. The Las Vegas Plaza was the site where Stephen W. Kearny, in 1846, claimed New Mexico for the United States. In the 1800s Las Vegas could boast notorious inhabitants such as Doc Holliday, Jesse James, Billy the Kid and Wyatt Earp.  It was indeed a Wild West town. In the first half of the 20th Century, Las Vegas was home to reunions of the Rough Riders and Las Vegas Cowboys’ Reunions.  Notable things to do and see in the area include The City of Las Vegas Museum and Rough Rider Memorial Collection, Las Vegas National Wildlife Refuge, Victory Ranch, Carnegie Public Library, the historic Plaza Hotel, Montezuma Hot Springs, and local antiques shops.
Powered by